Immersive Technologies for Creation and Communication

The Toronto SIGGRAPH Chapter is thrilled to present the fourth online event in our ACM SIGGRAPH Webinar series: Immersive Technologies for Creation and Communication.

This webinar will be moderated by Ian Hall (Director at Pixel Tours). Ian will be leading the discussion with the following panelists:

Working From Home in Animation

We’re proud to present the second online event in our ACM SIGGRAPH Webinar series: Working From Home in Animation! Register for free here.

The CG industry has been working from home for nearly an entire quarter. In our follow-up to the “Working from Home in VFX” discussion, representatives from three animation studios will share their experiences with the transition to working from home as well as the long-term effects the pandemic may have on the industry.

The “Working from Home in Animation” panel will take place on Thursday, June 11 at 2 PM EDT / 11AM PDT and be moderated by Jessica Glass, Production Technology Department Manager, DNEG. Jessica will be leading the discussion with the following panelists:

Working From Home In the VFX Industry

ACM SIGGRAPH: Fostering Inclusion Through Storytelling is a new initiative to foster inclusion by learning from the experiences of others.  We will have regular online presentations year round. Our first few presentations will address issues resulting from the world wide pandemic. Our first event will stream live on May 21st at 2PM EDT/11AM PDT and be available for later viewing on the siggraph.org web site. Sign up here.

Working From Home In VFX

Our first event will be a panel covering issues faced by companies in the VFX industry adapting to employees working from home. Joining us are representatives from three major visual effects studios to share their experiences and discuss the challenges they faced when transitioning to our new reality.

The panel will be moderated by Troy Brooks, VP Technology, Wildbrain. Troy will be leading the discussion with the following panelists:

Come join us online on Thursday May 21st and don’t miss out on this exciting panel!

As Vice President of Technology for Wildbrain, Troy Brooks oversees technology infrastructure, operations, and strategic direction. Troy brings more than 25 years of experience leading technology and pipeline teams in CG television, feature animation, video games, and VFX for film, for studios such as Digital Domain, Electronic Arts, Square Pictures, and Mainframe Entertainment. He is a co-founder of PipelineFX, and holds a BSc in Computer Science from Simon Fraser University.

Michael Ford is the Vice President of Systems Engineering and Software Development at Sony Pictures Imageworks.

Previously, Ford served as visual effects supervisor of the box office hit HOTEL TRANSYLVANIA 3: SUMMER VACATION and SMURFS: THE LOST VILLAGE for Sony Pictures Animation. He also worked on Columbia Pictures’ CONCUSSION. While at Imageworks, Ford served as CG supervisor on STORKS for Warner Animation Group, Sony Pictures Animation’s HOTEL TRANSYLVANIA, ARTHUR CHRISTMAS and CLOUDY WITH A CHANCE OF MEATBALLS 1 & 2. Ford’s Imageworks credits also include the Academy Award®-nominated film SURF’S UP and OPEN SEASON. He has been nominated for four Visual Effects Society Awards. Prior to joining Imageworks, Ford has worked on numerous feature films at Industrial Light and Magic and Centropolis FX including THE MUMMY, THE PERFECT STORM and GODZILLA. Ford is a graduate of the University of California, Los Angeles.

Luke began his career at MR. X in 2005; working on Silent Hill, Shoot ‘Em Up and the Resident Evil series, among other projects. Groves then pursued visual effects production at C.O.R.E. Digital Pictures and SPIN VFX, where he continued to focus on genre films Suck and Splice, as well as high profile television series The Tudors, The Borgias and Game of Thrones. Returning to MR. X in 2015, Groves produced visual effects for The Strain, Bates Motel and Marvel’s Inhumans, followed by more feature film projects such as Resident Evil: The Final Chapter, xXx: Return of Xander Cage, and, most notably, Guillermo del Toro’s The Shape of Water, winner of the Best Picture Academy Award in 2018. Over his career Luke Groves has worked on over 40 shows, earning multiple Gemini, Canadian Screen Award, Visual Effects Society and Primetime Emmy nominations. Luke currently serves as Global Head of Production for MR. X where he oversees production across all studio locations in North America and India ensuring successful project deliveries for MR. X.

Christa Tazzeo Morson is an 20-year veteran of the film and television industry. With long standing roots in visual effects and postproduction, as a producer and business development executive, she has worked with international filmmakers to deliver the best creative driven solutions for the screen. Tazzeo Morson is credited with work on the Academy Award winning feature SPOTLIGHT (Open Road Films) and the Emmy award winning television series GAME OF THRONES (HBO). Additional credits include READY OR NOT (Searchlight), UMBRELLA ACADEMY (Netflix), SUICIDE SQUAD (Warner Bros./DC) and A SERIES OF UNFORTUNATE EVENTS (Netflix). A founding board member of the Visual Effects Society (VES) Toronto section, Christa is an active member of the Toronto production community. She currently sits on the City of Toronto Film Board, the Industry Advisory Council for OnCreates and the WIFT-T Engagement Committee.

Your chapter needs you!

Not sure how you can contribute as an executive? We also welcome passionate people to join as volunteers. Volunteer positions include Event Manager and General Volunteer. Application form: https://forms.gle/Dy39sRrupjPMdn229

Secretary is responsible for the proper management and utilization of important records. Duties include

The publicity chair is responsible for maintaining the chapters presence on social media. Duties include, but not limited to:

The event manager is responsible for overlooking the workflow/logistics of event preparation. Duties include, but not limited to:

General volunteers are responsible for assisting Chapter executives. Duties include, but not limited to:

If you have any questions, please don’t hesitate to send us an email: toronto-chapter@siggraph.org 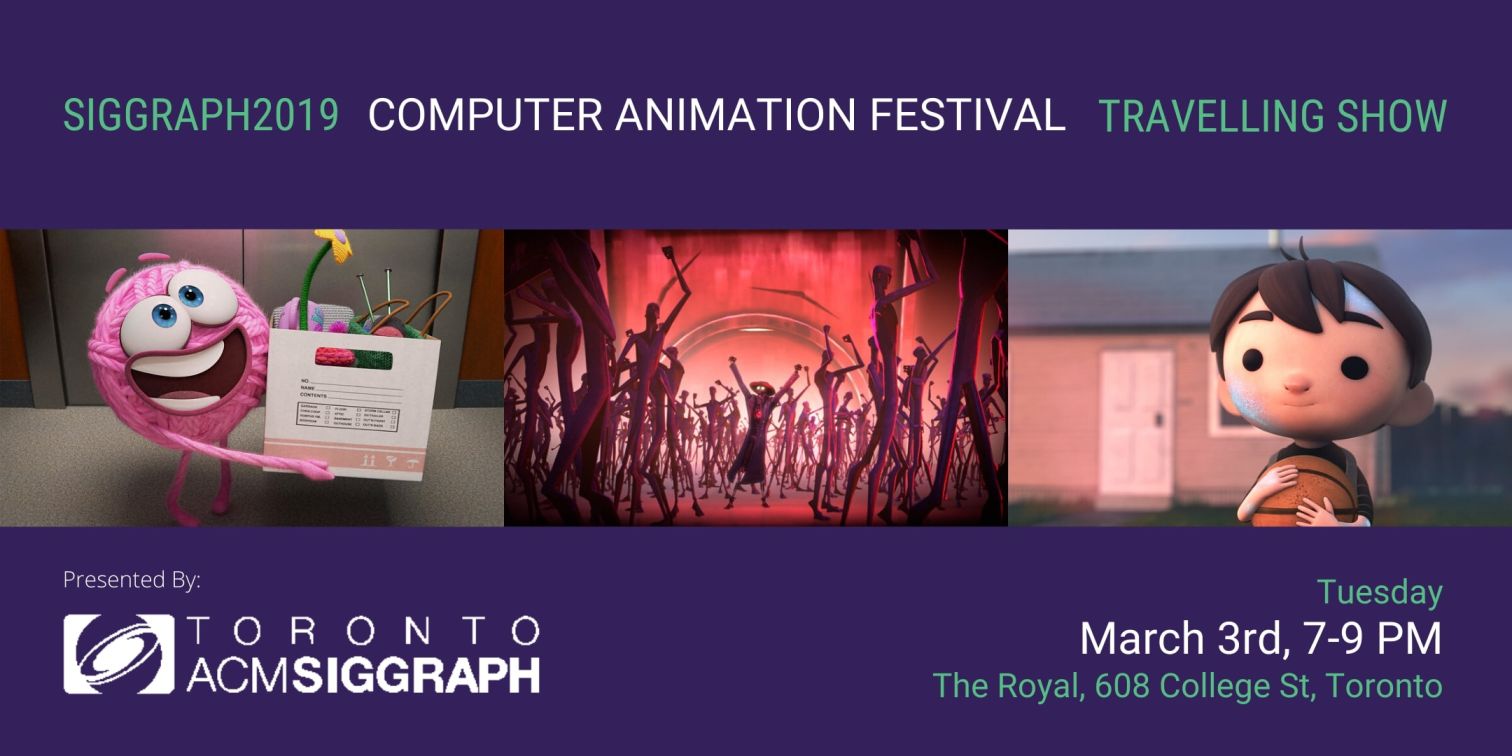 The Toronto ACM SIGGRAPH Chapter is once again bringing home the SIGGRAPH 2019 Computer Animation Festival for a screening with the full movie theater experience at The Royal on March 3rd. This year only, admission will be free and open to all!

The Computer Animation Festival consists of some of the best animated shorts and VFX breakdown reels created by students and professionals from around the world, and is selected by an international jury of experts. Since 1999, the Computer Animation Festival has been recognized as a qualifying festival by the Academy of Motion Picture Arts and Sciences, and several works originally presented have received an Academy Award for Best Animated Short Film.

Playing host for the night will be Mark Elendt, a local VFX veteran, Academy Award winner and longtime SIGGRAPH volunteer.

Want a sneak peek? Check the trailer out!

Get your ticket here!

Join now!
Receive our Newsletter
Recent Posts
Upcoming Events
There are no upcoming events at this time.
Archives
Meta