« Back to Events
This event has passed. 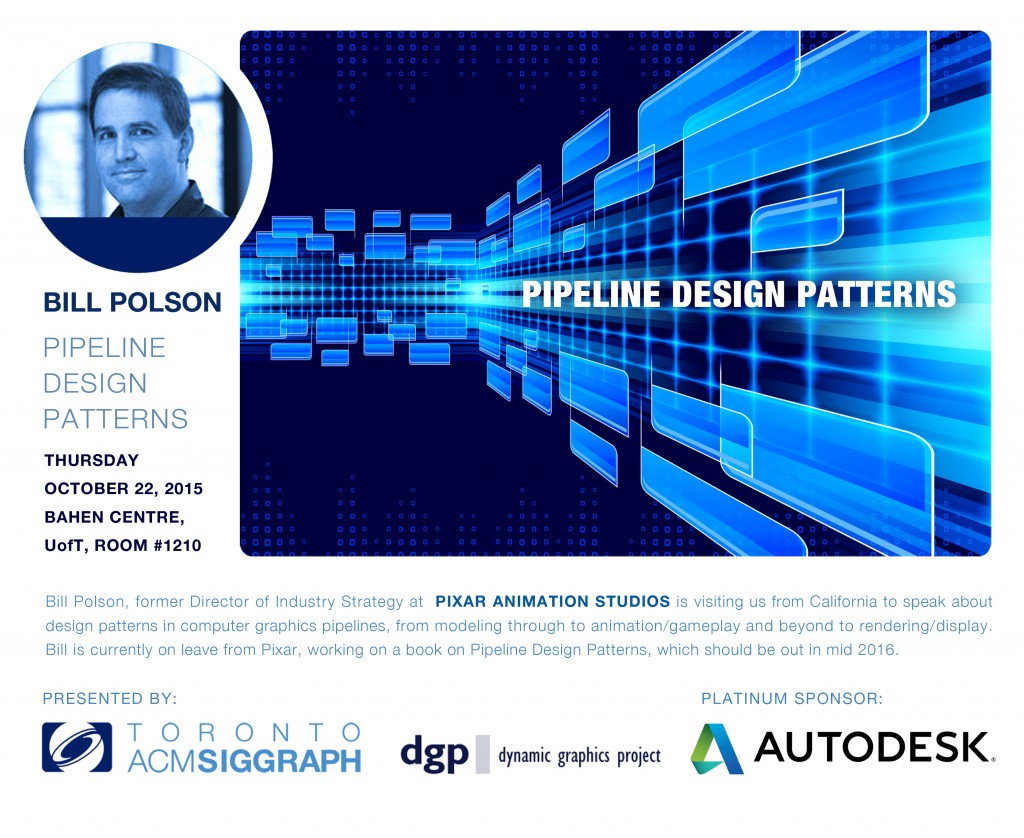 The Toronto ACM SIGGRAPH Chapter, in collaboration with the Dynamic Graphics Project of the University of Toronto’s Department of Computer Science, is proud and excited to host Bill Polson,  formerly the Director of Industry Strategy at Pixar Animation Studios.  Bill is kindly visiting us from California to speak about design patterns in computer graphics pipelines.

In his talk, Bill will use a simple example to illustrate the common problems of graphics pipelines: getting assets built (in lots of variations), getting them converted to optimized representations and aggregated into shots and levels, and generally carrying edits from modeling through to animation/gameplay and beyond to rendering/display. The talk will discuss the general “shape” of these problems and their solutions, and will propose some common vocabulary.

Bill is currently on leave from Pixar, working on a book on Pipeline Design Patterns, which should be out in mid-2016.  At Pixar, Bill was the Director of Industry Strategy, where he was responsible for Pixar’s relationship to the graphics industry. In this role he has shaped the product roadmaps of major graphics software vendors. He is the originator of Pixar’s OpenSubdiv effort, which is redefining how the industry handles high order geometry. Bill has had a number of management roles at Pixar, including Lead of Production Engineering, and Supervising Technical Director of Short Films. Prior to that Bill was a TD and software developer. Bill is active in SIGGRAPH, where he originated the popular new program SIGGRAPH Dailies!

Join now!
Receive our Newsletter
News Feed
Upcoming Events
There are no upcoming events at this time.
Archives
Meta